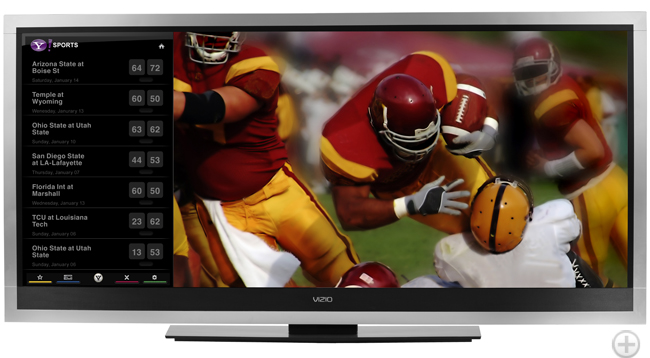 Irvine, CA and (CES) Las Vegas, Nevada – January 10, 2012 – VIZIO, announces the introduction of the first CinemaWideâ„¢ HDTVs with Theater 3D and VIZIO Internet Apps® (V.I.A.). The very first in the North American market with an ultrawide 21:9 aspect ratio, CinemaWide HDTVs are the ultimate display for cinema enthusiasts to enjoy films as they were created for the movie theater, in the CinemaScope 2.35:1 aspect ratio without the black bars as seen on conventional HDTVs.

This uncompromising cinematic experience allows CinemaWide viewers to see each frame of the movie as the director intended, for a more immersive 2D and 3D movie and gaming experience at home. In addition, CinemaWide HDTVs feature V.I.A. functionality with the unique ability to allow users to view apps side-by-side with full-size and full HD resolution 16:9 programming. «VIZIO CinemaWide provides the most accurate, broadest canvas for me to paint my film’s vision,» said award-winning cinematographer, Mauro Fiore, ASC. «Finally my films can be seen at home the way they were intended – in 21:9 aspect ratio.»

Three CinemaWide sets are being introduced – the 50-inch XVT3D500CM, the 58-inch XVT3D580CM and the 71-inch XVT3D710CM. Each of these products will be on display at VIZIO’s private showcase at the Wynn Hotel in Las Vegas during the Consumer Electronics Show, January 10 – 13, 2012.

«One of our most exciting introductions this year is our new CinemaWide HDTVs, which are a dream come true for movie lovers seeking that truly immersive theater experience which is only possible on a 21:9 aspect ratio display,» said John Schindler, VIZIO VP of Product Management. «Our perception is that consumers will immediately embrace the CinemaWide concept as soon as they experience it for themselves, not only because it enhances their enjoyment of films and games, but because it also enables them to simultaneously enjoy VIZIO Internet Apps without compromise to 16:9 content.»

Full Contact 2D and 3D
VIZIO CinemaWide delivers the true movie theater viewing experience at home by supporting the ultrawide 21:9 aspect ratio that renders films shot in the CinemaScope format without any black bars or loss of content as is sometimes experienced when films are cropped for 16:9 screens.

Big-budget Hollywood blockbusters and the majority of new productions are filmed in the much wider 2.35:1 or 2.39:1 aspect ratios, while today’s HDTVs have a standard aspect ratio of 16:9.

CinemaWide HDTVs are the first with the ability to display films in their native CinemaScope aspect ratio, as well as intelligently scale up 16:9 content so users can enjoy a more immersive experience from all their favorite titles, from classics to today’s latest films, without the distraction of black bars and loss of valuable screen real estate.

Interactive TV: Uncompromising Side-By-Side App + TV Experience
With CinemaWide HDTVs, users can enjoy interactive TV through an enhanced smart TV experience using the award-winning V.I.A. platform. CinemaWide HDTV ensures a seamless V.I.A. experience when watching TV by displaying apps side-by-side next to a pixel-perfect 16:9 full HD image. CinemaWide LCD HDTVs are the first sets in the market to offer this capability, allowing users to simultaneously browse and use V.I.A. on the left side of the screen without missing anything from their 16:9 programming on the right. Whether it’s checking a fantasy football lineup while watching a game, catching up with friends over Facebook or Twitter while watching TV, or tracking a personal portfolio while watching financial news headlines, viewers can complement their TV experience like never before.

At the touch of a button, the V.I.A. ecosystem provides an ever-expanding range of apps, over 75,000 movies and TV shows and more, from the best online services and content providers, including: Hulu Plusâ„¢, Amazon Instant Video, Facebook®, Flickr®, Netflix®, Rhapsody®, Pandora®, Twitterâ„¢, VUDU®, Yahoo!® TV Widgets and Fandango.

Navigating the V.I.A. platform is simple and comfortably accessible from anywhere in the room, thanks to the premium Bluetooth universal remote control with its integrated QWERTY keypad. Built-in 802.11n Wi-Fi and one of the industry’s easiest setup experiences make it quick to connect to the Internet over a wireless connection.

The accompanying Theater 3D eyewear produces far less eyestrain and headaches than conventional active shutter glasses, and is battery-free, lightweight and comfortable. Up to four pairs of Theater 3D glasses are provided with each set, and are also available in a rapidly growing range of styles and colors from brand name designers. They can even be used in most 3D movie theaters.

Completing the Picture
VIZIO’s advanced TV technologies deliver state of the art performance to please the most demanding viewers. These are the first* TVs capable of displaying CinemaWide Full HD resolution (2560 x 1080p), providing the finest detail available to date, whether viewing 2D or 3D films, games or TV programming. The 50-inch XVT3D500CM and 58-inch XVT3D580CM feature VIZIO’s Edge Lit Razor LEDâ„¢ backlight LCD with Smart Dimmingâ„¢ technology. VIZIO’s Smart Dimming intelligently controls each set’s array of LEDs, which is organized in zones. Working frame by frame, based on the content being displayed, Smart Dimming adjusts brightness in precise steps down to pure black (where the LED is completely off). This cutting-edge technology minimizes light leakage and enables a Dynamic Contrast Ratio of 1,000,000 to 1 for stunning picture quality. Both sets have a 120Hz refresh rate for smooth images, even with fast moving sports action.

The 71-inch XVT3D710CM takes performance to an even higher level, using VIZIO’s Full Array TruLEDâ„¢ backlighting with Smart Dimmingâ„¢ technology. Using over 120 zones across the entire display, TruLED backlighting is able to control specific areas of the image to a much finer degree than edge-lit sets, resulting in even deeper blacks and higher contrast, with life-like images that «pop» off the screen with an incredible 20,000,000:1 Dynamic Contrast Ratio. A 240Hz SPS (Scenes per Second) refresh rate renders amazing detail and clarity in fast motion scenes.

For more information on when CinemaWide HDTVs will be available please visit www.vizio.com/ces.

*VIZIO is the first company in the United States to deliver CinemaWide HDTVs in an ultrawidescreen 21:9 aspect ratio.

** Viewing this type of content may require Internet access, separate equipment and/or subscription services which are not provided